Thursday Morning, September 18th, 2012.... I dropped my kids off at a friends house. She watched them on Thursdays while I went to work. She told me about a helicopter crash in Iraq and my heart sank. My husband had been in Kuwait for a month. The night before I received an email that he would be on a flight that night to Iraq.
I drove to church and prayed. Prayed like I've never prayed in my entire life. And quite honestly it was a selfish prayer. Please. Don't let it be him. Please. Over and over and over.

Early afternoon came and my kids were home and down for their naps. The phone rang and it was a fellow Army wife. No names had been released yet. But she had found out the name of one of the guys who lost his life the night before. Sgt. Daniel Eshbaugh. My husband's best friend and the guy that my husband almost always, almost always, flew with. I screamed out like I had never done in my life and slammed the phone down. A life of grief and missery flashed before my eyes. A knock on my door was my next fear. And how would I tell my innocent little babies that daddy was not coming home.

My friends gathered around me. To hold my hand. To wait with me. I was waiting for the worst.  I was hoping for a miracle.

The phone rang and I didn't want to answer. Something else I had forgotten in that moment. Bad news doesn't come through the phone lines, it comes up to your front door and into your house and slaps you across the face. But that day... that day I didn't have to face the bad news. My miracle happened. My prayers were answered. It wasn't him. The voice on the other end was an Army official who told me sternly but with some major compassion and a hint of assurance "No news is good news".

A few hours later, the phone rang and at the other end was my husbands voice. Alive. Alive and shattered after having just seen his best friend and 6 of other co-workers and brothers in arms go down in flames.

Each year when September comes (and other times through the year) I am reminded of how that day went. Of how that day DIDN'T go. Of how I got my happy ending and 7 families did not. I think of those long afternoon hours of dispair. I think of how that woman called me to tell me what she knew. Since then I have hated her. Hated her for what she did to me. She broke all the rules and I'll never know why. But its time to stop blaming her. I doubt she made the phone call knowing how I would react. I honestly just believe she didn't think at all. So its time to forgive her. And let it go. And honestly... had I not had those hours... maybe I wouldn't treasure what I have so much now. Maybe when times are bad, or boring, or normal, I wouldn't stop to think that my life couldn't have gone a different direction that afternoon. I am so grateful. 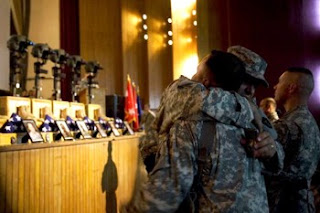 Red River 44, You are never forgotten.
created by Unknown at 8:00 AM

This made me cry. :( You are such a wonderful chick. Thank you for your honesty!
Thank you for allowing your hubby to serve our country. We don't take it for granted in the Morrow Household!
Xoxo!!!

You were a winner on my blog this weekend. Please email me.
momoftheswenson3@gmail.com I will pick a new winner tonight if I don't hear back. thanks.
Andrea Swenson
jandaandco.blogspot.com